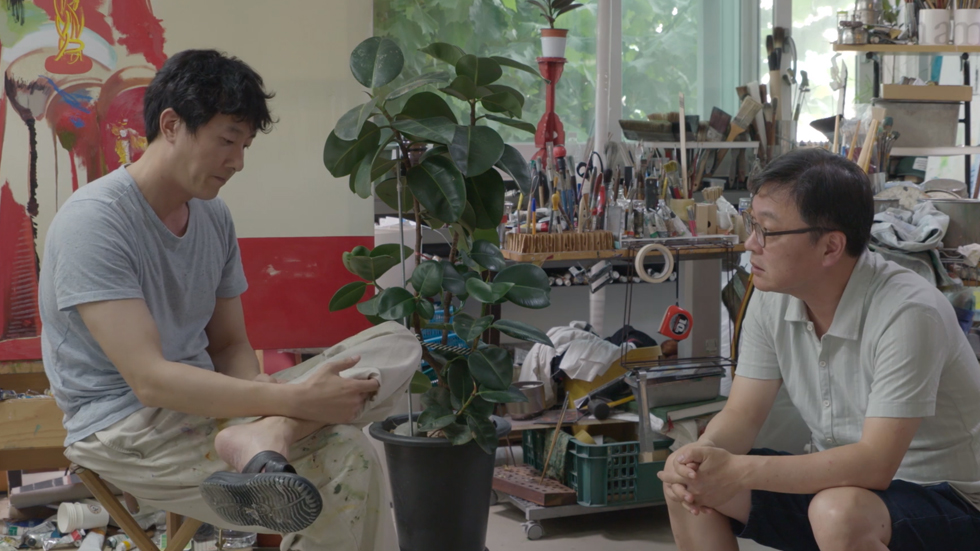 It is still too little known among film critics that South Korea in the late 90s, when Hong Sangsoo began his filmmaking career, was a time of immense turmoil due to the 1997 Asian financial crisis, and the consequent economic restructuring imposed on South Korea by the U.S. Treasury. What makes Hong different from contemporaries like Bong Joon-ho, whose films more directly respond to Korean political life, is the way in which Hong’s films eschew explicitly political content. Instead, they respond to present crises by turning inward: they explore the private, the personal, the complex and unexamined ways in which the macro forces of history, nation and language mold and impress the texture of everyday life.

Hong’s is an austere cinema: he relies on long, static takes, master shots, and sometimes almost imperceptible zooms to narrate quiet, unadorned scenes. And yet the unexpected result is that the more simply a Hong film is shot, the stranger it becomes.

Yourself and Yours is a great example; a curious case of a woman’s mistaken identity becomes even more peculiar as men get drunk around her. Morally compromised—if not outright unsavory—men function as important narrative engines in his films; often film directors themselves, they drink to excess, have neurotic fits and obsess over women. In Hong’s cinematic world, the gods have fled and all that remains is male desire.

But Yourself and Yours also shows an important paradigm shift in Hong’s filmography. In this film and all of his subsequent work, female characters drive the narrative. Beginning with Yourself and Yours, Hong seems to be absorbing the lessons of his previous work and incorporating them into his creative process. It’s a pleasure to see his work evolve and continue to surprise.

Peter Kim George
is a playwright, film critic, and lecturer of New Korean Cinema in the New York City. 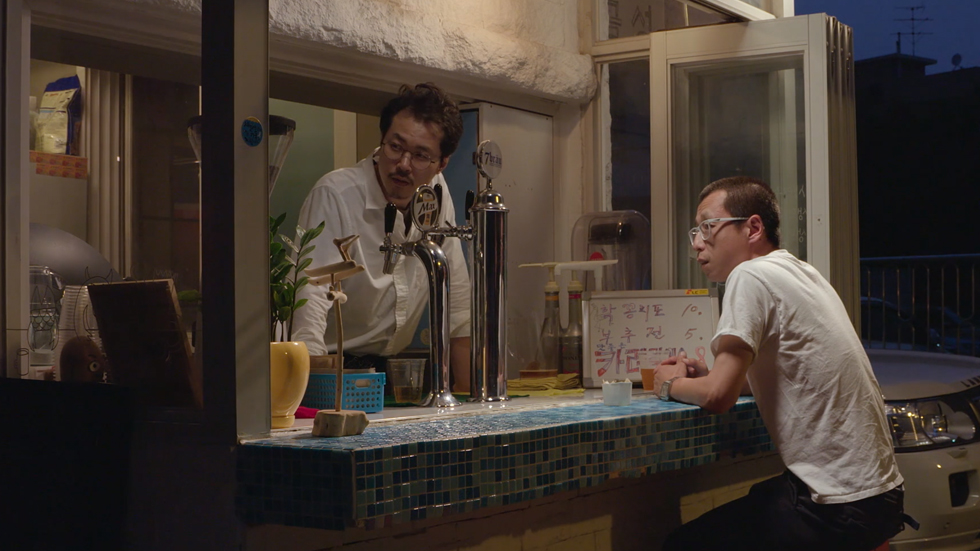 Hong Sangsoo has always had an affinity for surrealism. Usually the surreal lurks around the edges of his films, creating a distance from the narrative that is sometimes comic, sometimes serious. But Yourself and Yours works a bit differently: here the surreal is central to the plot, so that one cannot recount the story without noting its strangeness.

Surely the film was built upon the comic inspiration of female lead Minjung (Lee Yooyoung) shamelessly but convincingly piling lie on top of lie in her casual social encounters, with no imposture too wild for her to double down on it. (Comedy about alcoholism has fallen into disrepute in recent decades, but Hong is game to revive this ancient tradition.) It’s nearly the formula for a silent comedy of escalation, in which the game would be to elaborate and re-contextualize a gag until the narrative threatens to collapse under its weight.

But Hong, or at least the Hong of 2016, wants an additional dimension, and builds the story of Minjung’s boyfriend Youngsoo (Kim Juhyuk) into a second narrative thread occupying a comparable amount of screen time. After rupturing the love affair with an abusive, uncontrolled, and very Hong-like tirade against Minjung, Youngsoo drifts off into a state of regret and longing that at first seems a bit protracted.

But the final scenes redeem the film’s strategy: Youngsoo’s new-found unequivocal commitment to acceptance and love collides head-on with the surreal plot gimmick (amazingly, Minjung pulls her I-beg-your-pardon-sir routine on her boyfriend as well, so deep is the character’s fusion with Hong’s outrageous agenda) and absorbs it completely. The love-conquers-all conclusion is a Dickens-like narrative trick that conveys change and redemption more forcefully than characterization ever could.

Dan Sallitt
is a filmmaker and film writer living in New York. 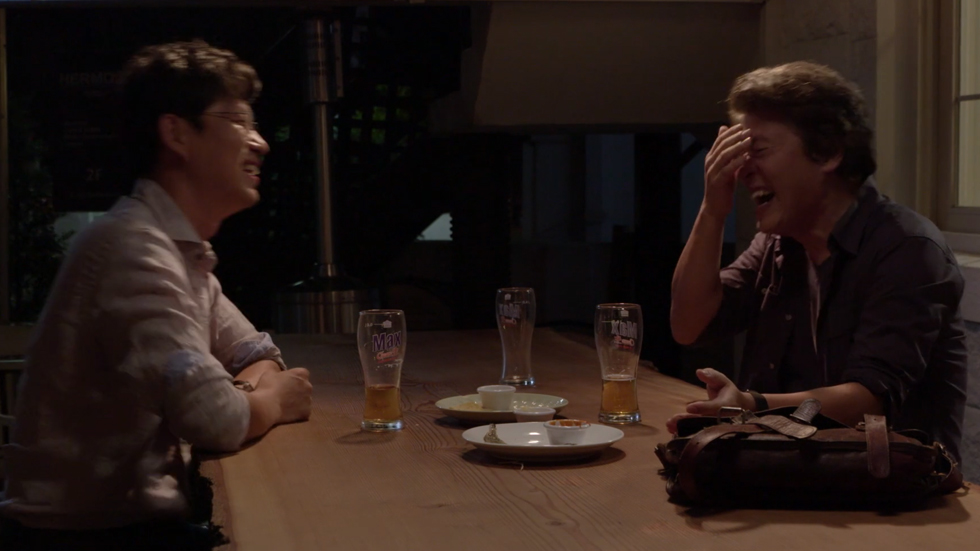 One of the things that I enjoy most in Hong Sangsoo’s films is their acting. Director Hong works with wonderful actors. He writes scenes of great joy for them to perform and shoots them in a way that allows our full enjoyment of their play. Yourself and Yours has 43 shots. Avoiding cutting, Director Hong uses zooms and pans to mediate the scenes without interrupting the acting.

Yourself and Yours is a film about doubles and lies. The liar performs a double function, as she/he has to take in truth in order to offer a deviation from it. The lie is both a variation from the truth and truth itself. Similarly, actors also perform the art of doubling. They perform the acts of others while being other, trying to make us experience a glimpse of truth through our suspension of disbelief.

Thus, watching an actor playing a character who lies is quite precious. In its mischievous way, Yourself and Yours might (or might not) provide many of these moments. I suggest that at some point while watching the film, in one scene, any scene, forget about the subtitles and just watch the actors. Don’t worry about the information. (“Knowledge is not important,” as one of the characters in the film states.) Just watch the actors, see how they might be acting out lies to each other and enjoy the confusion.

Watch lead actress Lee Yooyoung as she is called “Minjung” in multiple encounters with these three men. Watch heartbroken and utterly disoriented Kim Joohyuck playing happiness in his dream sequences. Watch Kwon Haehyo as he is made fun of for his gray hair. Watch Kim Euisung playing drunk, bumping into the table and the chair at the pollock restaurant. Watch handsome Yu Junsang as he admires Minjung or Minjung’s double (!?) talking about her true desire: meeting a decent man.

Yourself and Yours is a film about pathetic men and a woman who likes drinking. And all of them are seeing double. The woman because of the beers and the men because of the confusion that comes from projecting onto her the idea that they have of her. Instead of seeing her, they are seeing themselves. And, believe it or not, this sort of confusion produces more headaches than makgeolli.

Matías Piñeiro
is an Argentine film director, writer and professor who lives and works between Buenos Aires and New York City. 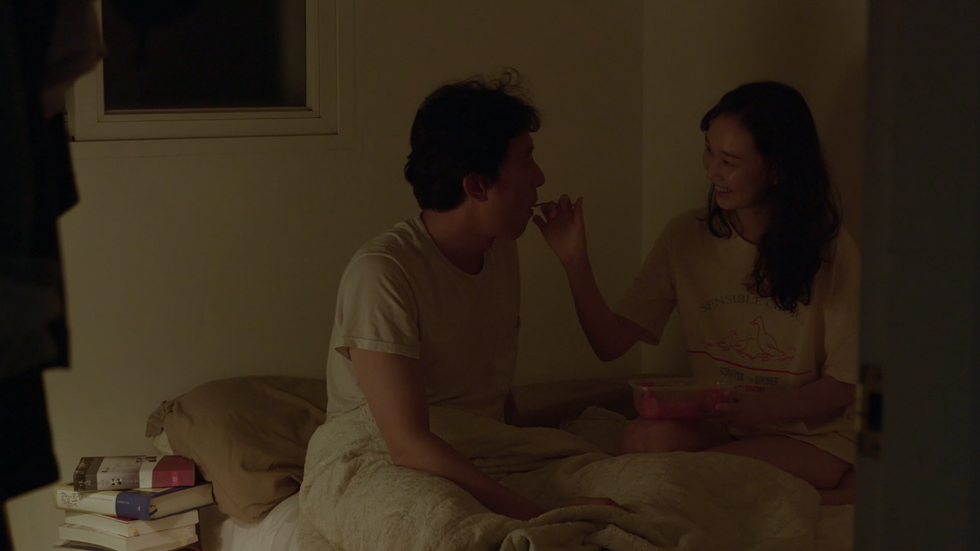 Minjung: These are better than melons.
Youngsoo: Melons are sweeter but watermelons are refreshing.

"Sweet" isn’t exactly Hong Sangsoo’s flavor of choice when it comes to on-screen romance. The ones he depicts often involve messy affairs with often-inebriated film directors or regret-filled do-overs and dream sequences.

Yourself and Yours is deceptively straightforward in that there are no obvious narrative shifts. And while it’s a bit of a head-scratcher, its small mysteries can be explained either by taking Minjung at her word—that she is a twin—or, as I prefer, by accepting that she’s seizing narrative control over the local gossip that she’s a drunken lush. Seen in the second light, the film is a refreshing spin on the female doppelganger trope (one that usually furthers a male agenda) and subverts a more prevalent storyline within the Hong filmography, which often sees the male character taking a redo in a failed relationship.

By the end of the film, Minjung—who maintains that she is not actually Minjung—is reunited with Youngsoo, her boyfriend who has spent much of the film’s runtime searching for her and defending her to his friends without actually accepting her. When they meet again, he claims to love and understand her, and he and “Minjung” consummate their reformed relationship.

Or was it all a dream? The camera pans from the bed, where the couple was together, to the candle on the floor, then back to the bed as Youngsoo wakes up alone. Perhaps, this is another example of a Hong male lead, lost in his illusions. But then “Minjung” walks in with a tub of watermelon: a vision—and a real one at that. They savor the treat in bed.


Return to YOURSELF AND YOURS homepage.